A Tale of Two Mugs

This post is in honor of P’s mom (“Mamu”) who will be arriving from Nepal in eight days.

About four summers ago (well I guess five if you count this summer), right before P and I moved from Central New York to New England, we spent the summer apart. I was working in Cape Town, South Africa and he was home visiting Nepal.

And we both had very different experiences with tea.

I was working with a study abroad program (as I had the summer before), it was crazy and hectic, but I loved being “in the field.” Although it was “summer” in New York, it was technically “winter” in South Africa being that it is in the Southern Hemisphere. For a Northeastern-winter-hardened-lass like myself, I didn’t consider Cape Town “winter” days so bad– usually a long sleeve t-shirt, or maybe a light sweater would suffice. However much like the winters in Kathmandu there are no central heating systems in local South African homes, and the cement block housing can feel like refrigerator units come night time (especially in a dormitory!) In the evenings I would fill a hot water bottle–grandma style–and walk around with it in between my shirt and my sweatshirt, and sleep with it cuddled up in my dorm bed for extra warmth.

One of the things I love about South Africa is the local roobis tea. It is gaining popularity in the US, but it can still be kind of pricy (compared to regular black tea), but in Cape Town I could buy hundreds of tea bags for just a few American dollars. Need-less-to-say I used to come back from my forays to South Africa with ziplock bags stuffed with roobis to last me through the year!

So the combination of the tasty tea, and the chilly nights meant that I was drinking buckets of roobis on a daily basis. Cup after cup after cup in the dormitory dining hall.

The students I was working with had volunteer projects in the local townships–Khayelitsha, Gugulethu, and the Cape Flats, and through supervising the students’ work I had the chance to get to know some of these communities. So when I was in one of the local Cape Town tourist markets and came across a market stall of pottery and ceramic work from Gugulethu I had to check it out. Amongst the platters and salt shakers, tea pots and bowls, I spotted a large textured mug with an elephant on the side. I thought, well, I’m already drinking buckets of roobis, I might as well drink those buckets from a giant flashy African mug!

After that, in the evenings, I defrosted with my giant mug, holding it in my hands and against my cheek for warmth, and filling my belly with delicious steamy roobis tea.

Knowing how much P loves tea—albeit Nepali milk tea—I thought he would love the giant mug when I returned to the US.

A picture I found on Goggle of Sibongile Pottery from Gugulethu

Meanwhile P was in Nepal, also drinking buckets of tea, but those buckets of tea were spread out over the course of hours and hours of drinking. Much of the day was spent sitting on the flat cement roof of his house, people watching the rest of the neighborhood, chatting with neighbors, friends and family that stopped in and said hello, and sipping milk tea from small small mugs.

In the US we are used to things being bigger—bigger cars, bigger roads, bigger buildings. Even our cups and plates and mugs are big. One of the souvenirs that P brought to his family on this visit was a US-regular-sized coffee mug with the logo of the university he attended for his master’s degree. It wasn’t until he saw his parent’s reaction—“Oh a pen holder!”—that he realized that the US-sized-regular mugs were much too large by Nepali standards for actual drinking. As he reverted back to his innate Nepali-ness, he found enjoyment drinking out of small tea cups, and drinking cup after cup.

“Our cups back home [in US] are too big,” he thought to himself, “I should bring a set of these nice small mugs home for C, she would like them.”

At the end of the summer P and I got home within a few days of each other, and were eager to show the fun treasures we lugged back from our separate summer adventures. I told him, “Just wait until I show you this great mug I brought back from South Africa. You’ll love it!” and he responded, “Oh yeah? I brought back mugs too, they are so cute, you’ll also love them!”

So we pulled them out. The giant mug and the baby mug, both, interestingly enough, with elephants on them.

This picture doesn't do the size difference justice, but trust me, one is big and wide and the other is tiny and skinny. "US-regular-sized" mugs are probably somewhere in between these two sizes.

“I thought you would love this mug. It’s so big, you can fit so much tea in here!” I said.

“It’s nice, but just too much, look at this cute small mug. You can have a small bit of tea, and refill it afterward. I never realized how big everything in the US was until I went home this time!”

Over time, and lots of tea drinking, we eventually went back to using our US-regular-sized mugs (although I must admit that I still use my giant roobis tea mug everyday but now it is my giant water mug at work. It blends in with all the other flashy colorful international stuff I have all over my office.)

However–when P’s parents came in 2008, I was quick to make tea (like a good little buhari-to-be) when they got back to our apartment from the airport. I didn’t think about using the small elephant mugs that P brought back from Nepal in 2007, and instead gave them a US-regular-sized mug of milk tea. P’s mother’s eyes were huge when I handed her the mug, insisting again and again it was too much for her. I had to take the mug to the kitchen and poor ¾ of the tea into another mug before giving it back to her.

P’s parents arrive on June 29th—and this time I’m prepared. I now have a full set of “small” teacups, just the right size for Nepali inlaws–so bring on the chai! 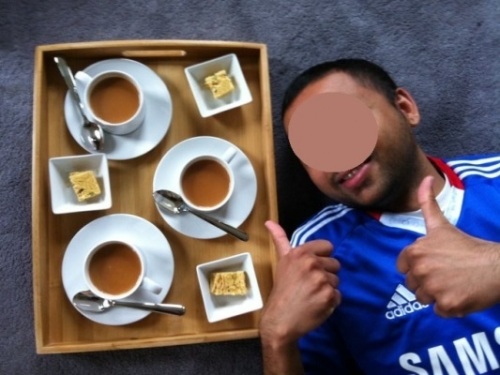 Our friend D poses with the small tea cups, with milk tea and Nepali sweets. We are only missing Mamu to make this picture complete!