Panchami and the Bhutanese Refugees

Back from New York, Teej and fasting.

I fasted from about 9pm on Friday night until about 9pm on Saturday so that when we were in the South Asian section of the city (Jackson Heights, Queens) I could eat at the Nepali restaurant with our friends. I found fasting a bit easier this year, I think because we were so busy walking around and doing things in the city that it made the day pass more quickly and kept my mind off of it. Although when someone sitting next to me at the tennis match ate a delicious smelling panini it made my mouth water.

Me at the US Open, Roger Federer in the background, wearing my red Teej clothing

On Sunday P and I woke up early and drove back to Massachusetts so that I could meet up with AS and S-di at the Bhutanese refugee gathering. By the time I arrived one of the pujas had already taken place, but I was quickly ushered to the newly forming ring of women preparing for the second puja.

AS and S-di were dressed in beautiful red saris, AS wearing the same clothes as she wore several months prior for her wedding including potes, bangles, dori and tikka. Since I was walking in straight from the highway, I was only wearing a red shirt and sweater and P’s mother’s red Teej necklace, but at least I had the right colors on.

AS explained that the women had organized a puja for Panchami, which is technically the fifth day (panch= five) but was actually the third day of Teej (Day 1—Daar feast, Day 2—Teej fast)– sometimes I really don’t get the Nepali calendar. The puja is in honor of seven gods represented by seven stars in the sky that are in the shape of a question mark (I’m assuming she was referring to the “seven sisters,” or Pleiades, in Orion’s belt, but maybe she meant a different constellation?). Again, the women generally fast until after the puja, and the puja is supposed to cleanse them of any sins they committed during the year (particularly sins they may have committed breaking menstrual taboos such as touching food, etc).

I enjoy pujas, especially larger chaotic ones. I don’t ever really understand anything that is going on, but there is always a lot of activity and confusion. Yesterday the large cluster of women sat in a circle with the priest (the only man in the group), who had spread before him an assortment of puja paraphernalia such as flowers and flower petals, fruits, rice, water, and incense. As the priest chanted prayers the women would pass around paper plates/bowls with flowers, water, or rice. I’d periodically be prompted to take a small handful of flower petals or water, hold it between my hands (in the namaste gesture), drip the water on my head, or touch the petals to my forehead, and then throw the petals into the middle of the circle.

At one point I was given a small plate on which  I  had to place a banana, apple, rice, flowers, water dyed with red tikka powder, and coins, and I offered it to the priest as a blessing. Even if I’m unsure of what to do, the other participants are usually willing to share or help me out, passing me handfuls of rice or miming the hand gestures I should follow.

Near the end of the puja the women stood, and started shuffling clockwise around the pile of puja material while the priest chanted, and plates with apples stuffed with handfuls of incense were lit as an arti and burned like candles. We were supposed to circle the altar seven times (but I might have only made it around three), and after the priest circulated through the crowd giving post-puja red tikkas.

Here are a few pictures from the event—

women sitting in the circle near the priest

AS (left) explains a few nuances of the puja as I'm passed a bowl of water. The priest's peach-pink-gray topi hat is seen to the left.

Listening to the priest for the next step. S-di is in the red sari with green pote to the left 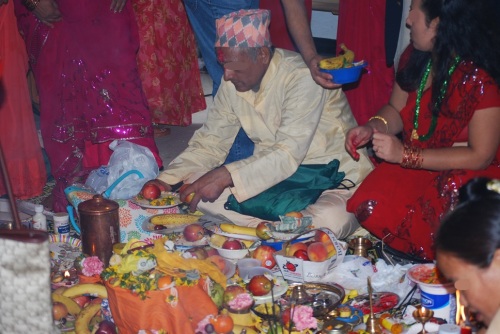 Giving offerings to the priest

Circling the puja area. You can tell the married women from the unmarried women by their necklaces (or lack there of). 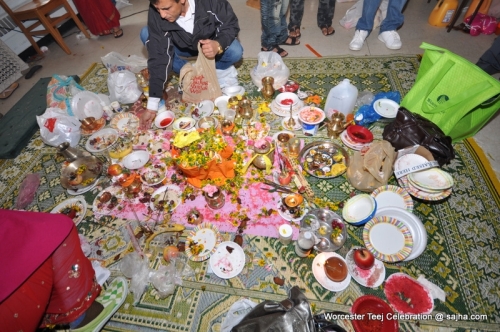 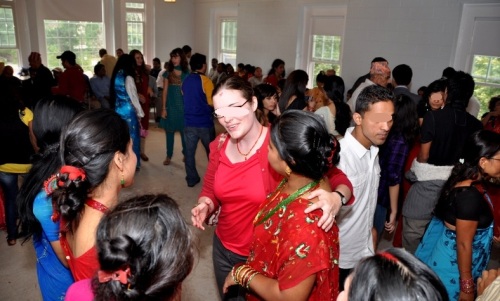 And apparently a Nepali website (Sajha.com) captured me in action too-- chatting with AS and S-di 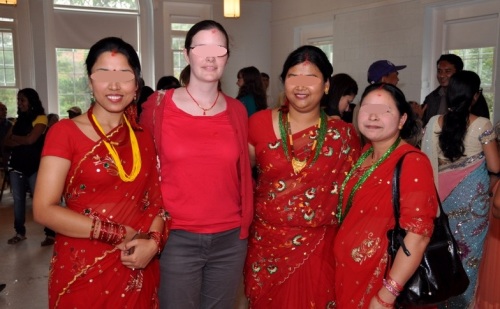 And posing for pics! AS, me, S-di, and an acquaintance of S-di's

For more views of Teej you can check out Nepal News video clip on celebrating in KTM this year.