A year ago today I was getting married, Nepali style…

This year went by so quickly. It’s hard to really believe it’s already been one year.

Last year at this time I was… sneaking out of the house to get my feet secretly hennaed during a torrential downpour, and I was certain it would rain through our entire wedding…

Last year at this time I was… at our rehearsal dinner, with our close friends and family…

(As I type this) Last year at this time… I was helping S-di, M-dai and P set up chairs in the Hindu temple, then going to the hair dresser with R and AS to have my hair pinned up, then going to S-di’s house to be folded and pinned nicely into my wedding sari along with the other sari wearing ladies.

By 3:30 we were both at the temple, and a little after 4pm the ceremony began.

It was exciting, and fun, and crazy. I had an amazing experience with all our friends and family, and I was so happy to be marrying my best friend and life partner.

A year crept up on us fast. But I look forward to many many more. You truly are the best match for me.

Here is one of my favorite pictures from this time last year… post-wedding #1: 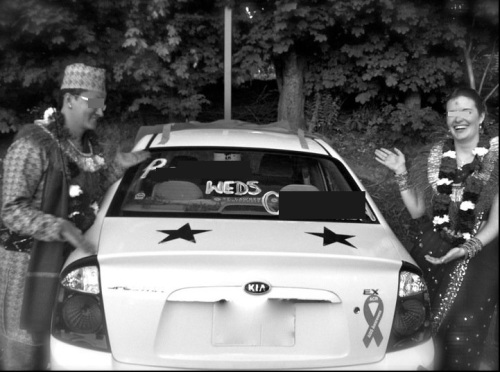 1)      P is amazing at finding random amusing things on the internet, which led us to the website wimp.com. We spent the better part of an evening a few nights ago watching videos linked off the page. That’s how we found “28 cartoon theme songs in 7 minutes.” I didn’t know all the theme songs, but I knew a good deal of them, and there is always something comforting about hearing the theme song from a cartoon you used to watch while eating cookies after school, or crunching on cereal in the morning. I busted out with lyrics that I hadn’t sang in 20+ years, and was surprised to find I still knew most of them! As the song progressed P said, “Where is Barbapapa?”

2)      Recently there was a facebook meme where many people were encouraging their friends to change their facebook picture to a cartoon character from their past “to help child abuse.” I noticed several friends of P’s changed their profile picture to characters from Barbapapa.

So if you are like me, perhaps you didn’t have Barbapapa in your childhood, and might have no idea what I am talking about. But Barbapapa seems to be a beloved character from the childhoods of many a Nepali I know.

So what is Barbapapa? According to Wikipedia (my favorite website of all time) it is both a title character and the name of the “species” of said character from a series of French children’s books written in the 1970s by Annette Tison and Talus Taylor. (barbe à papa is French for “cotton candy”).  The books were later translated into 30 languages, and the cartoons became quite popular particularly in many Asian countries.

Barbapapa himself is a generally pear-shaped, pink shapeshifiting blob-like creature who stumbles upon the human world and tries to fit in. The shapeshifiting is usually accompanied by the saying “clickety click—Barba Trick”(or other similar things in a multitude of other languages)… After various amusing adventures, he comes across a female of his species (more shapely, and black-coloured), named Barbamama. They produce seven children, known as the Barbabies, each a different colour:

P’s brother U in particular has shared the Barbapapa love with me before, so if you want to learn a little bit more about your significant other’s childhood, maybe see if he or she has any Barbapapa memories they might like to share. What is their favorite Barbapapa character?

Posted in Society and Culture