NAFSA, the Association for International Educators, recently released estimates of net spending of international students in the US Economy. At a time when many people are being very protectionist about jobs– “don’t take jobs from the American people” — it is nice to see some positive statistics about some of the internationals living in the US. International students are good for many reasons… multiculturalism on campus and in the classroom, diversity of perspectives and experience, even economically positive!

According to the estimates, students contributed $17.6 Billion to the US economy. To check out the report and see the individual state breakdowns click HERE.

Als0 on a different note, P says that today is GIS Day… so since I mentioned International Education Week, I have to be fair and can’t forget to wish everyone a Happy GIS day. I guess this shows that we are both nerds.

Over the past week or so, while talking to family back in Nepal and wishing “Happy Dashain” we kept hearing about the Nepali currency shortage. As part of the holiday, many families (such as P and U) send money home, and families are unable to retrieve the electronic cash transfers due to lack of bank notes. So when I read the news this morning, I thought I’d share:

The authorities in Nepal say they will introduce measures to alleviate a shortage of bank notes in the country. 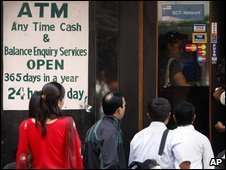 Nepalis have been queuing at ATMs in hope of getting cash.

As a result of the shortage, banks have limited how much cash they dispense and some businesses have been unable to pay employees and suppliers.

The finance ministry says it will introduce old but flawed bank notes that were printed but never circulated.

The crisis threatens to disrupt the country as it celebrates its biggest annual festival, Dashain.

Increased demand for rupees during the religious festival has exacerbated the shortage.

Long queues were seen at ATMs across the capital.

The BBC’s Joanna Jolly in Kathmandu says that although credit cards are readily available, most Nepalis rely on cash for everyday purchases.

Bank governors blame the crisis on a late consignment of new bank notes from France.

The French company contracted to print Nepalese rupee notes is two months late in delivering most of them, the Associated Press news agency reports.

The government has also said that it plans to airlift some of the late consignment to Nepal.

The finance ministry has formed a committee to investigate why the shortage happened, our correspondent says.

Many commentators suggest poor financial management since the end of Nepal’s 10-year civil conflict has contributed to the shortfall.

Dashain is a 15-day Hindu festival marking the triumph of good over evil. During the annual festival Nepalis return to their home villages with gifts and foods for relatives.

Posted in Festivals, In the News