We started preparing for the Bhoj around 12:15 when P’s younger cousin walked me to the local beauty parlor, a small shop tucked off one of the main neighborhood roads. The shop was barely big enough to fit the four parlor chairs (which were computer/office chairs) and the small sitting area for waiting customers.

The beautician seemed excited to work on a foreigner, and commented that my hair was “ramro” [nice] and soft (I’ve been told quite a few times my hair was “so nice” and “so soft” this trip. I’ve never really thought of my hair as nice, but kind of thin, stringy and frizzy; instead I’m jealous of many of my South Asian friends’ hair which I think of as “so nice” and “so thick.” I was told my hair was “so soft” in East Africa, but compared to tightly curled Sub-Saharan African hair my straight longer hair probably does seem “soft,” so I didn’t seem as surprised.)

Since my hair was “so soft” and apparently slippery to handle, the beautician slicked my hair with about a bucket of hair gel, then divided my ponytail into sections and rolled each section into a tight loop and secured it with bobby pins so that the final product was a large circular pun that looked weaved together at the center. She added small pearl pins and small red fabric flower pins to give it some color and design, and finished it off with glittery hair spray. 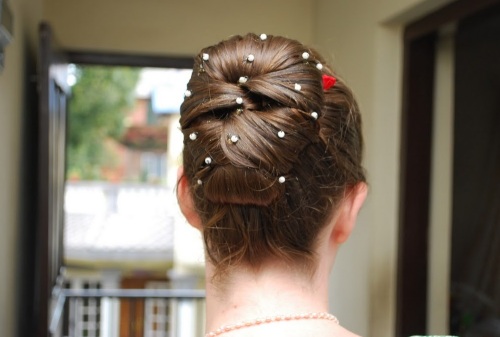 I was happy I could follow most of the conversation between the hairdresser and P’s cousin. They spoke sparingly and in short sentences:

“Is this for a wedding or a bhoj?”

“Where is your bhauju [sister-in-law] from?”

“How long has your dai been in America?”

When I got back to P’s place, his mother told me it was time to do the rest of my preparation. The two women who help in the house sat me down in P’s parents’ bedroom. One woman—L Didi—gently strung a long red pote necklace over my head and new hair style while the other painted my toe nails and finger nails fire engine red. As my fingers and toes dried P’s cousin (the one who took me to the beauty parlor) and the women who painted my nails debated over what make-up would look good on me–in a place where my pale-as-a-ghost skin color sticks out like a sore thumb, make-up shades take some deliberation. The nail polish woman powdered my face and P’s cousin started putting pale sparkly eye shadow on my eyelids. The woman took some kajol (eye liner) and lightly lined my eyes and put mascara on, while P’s aunt and mother debated over what shade of lipstick I should wear. I vetoed the first bright red one, and agreed to the lighter more natural looking pink. 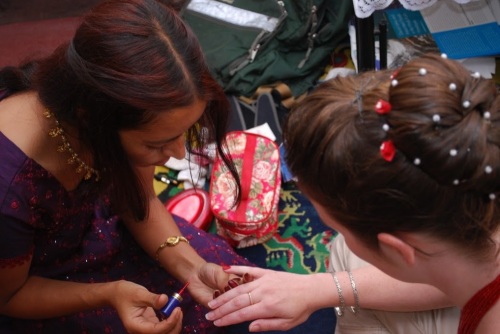 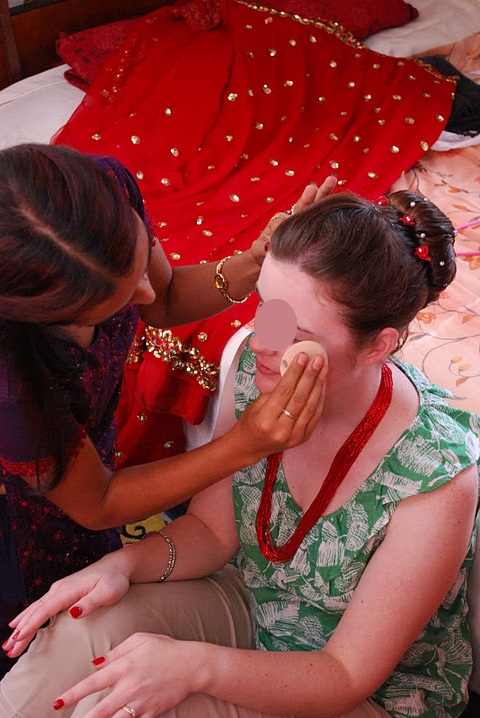 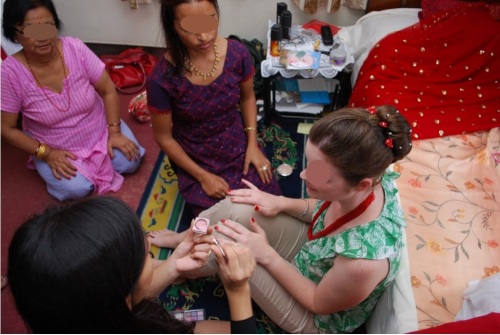 What the 'naya buhari" should look like was a group decision... 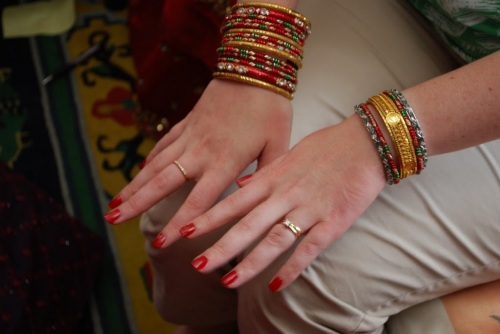 Borrowed some gold bangle bling from mamu, although that thick one was a tight squeeze that scraped the back of my hand as it was forced over my thumb

With makeup done the extra women left the room while I put on my red petticoat and blouse. L Didi is the resident sari expert in the house and generally helps Mamu tie her saris (Mamu feels more comfortable in salwar kameze and usually wears those instead of sari on a daily basis). The last time I was here L Didi tied my saris, not because I didn’t know how, but because I was too slow, and her sari fixing looked nicer.

L Didi wrapped me up and made sure everything looked correct, occasionally patting me on the hip and saying, “dheri ramro cha” [very nice]. 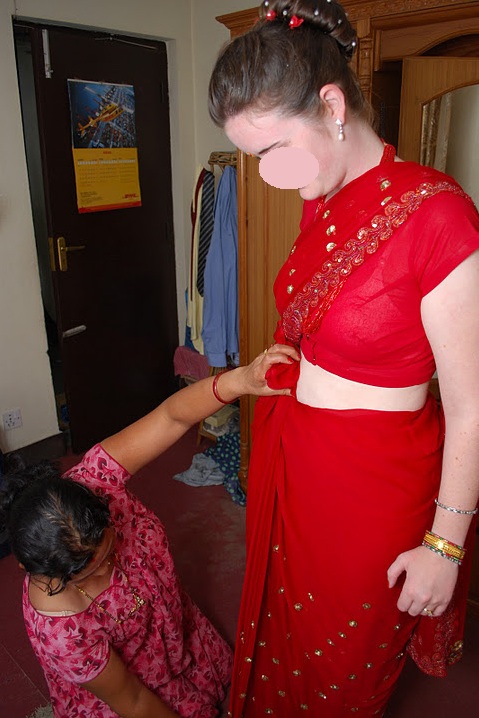 Getting wrapped and fluffed up by others makes me feel like a living doll, but this was their family’s wedding party and I was ready to go with the flow. Everything looked so nice once they were done anyhow. One I was finished everyone else had to get ready—P’s mom’s hair was done by the woman who painted my nails, P’s cousins got in their saris– hair was curled, makeup applied, high heeled shoes put on. By 4:30 we were all ready to go. 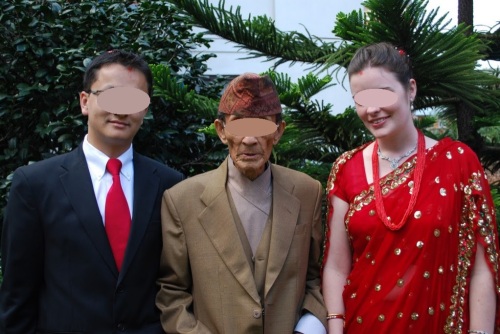 With P and his grandfather, waiting for the car to the Bhoj venue.

10 responses to “Preparing for Bhoj”