Not to leave you guys with something so heavy over the weekend, I wanted to chat about something happier, or at least kind of amusing.

My office (a converted old house on the edge of the university campus) is on a relatively steep hill. Last night we had a short lived storm of ice and snow, and today it is quite cold. Whenever it gets slippery out I hear the whirr whirr of rotating tires stuck on the hill outside my office. From my window I’ve seen mail trucks slip into snow banks, small cars try valiantly to make it up the hill only to give up three quarters of the way and have to slide back down the hill backwards. I’ve seen lots of fish tailing vehicles and snake like moves to try and coax cars up the hill. I haven’t seen anyone get hurt, instead it is more like one of those hidden camera tv specials, where everyone tries to do something, and everyone comedically fails.

When a lot of people think about Nepal, I think people think about ice and snow. Of course the mountains have many year-round glaciers, and in the winter the high altitude villages get quite a lot of wintery weather, but a good portion of Nepal is snow free. In 2007 the Kathmandu valley saw its first snow fall in 60 years and I’m not sure if the Terai (plains area bordering India) has ever seen snow.

Meanwhile I grew up in Central New York. What I like to call “the land of ice and snow.” For some (if you are not from there), Northern New York might not be the first place you think of when you think of nasty winter weather… instead you might think of Alaska or Minnesota or Colorado, but our location on the eastern edge of the Great Lakes positions us well for annual snow blasts.

Because of this, we Upstaters pride ourselves on our “amazing” winter abilities and “survival skills,” and P calls me out on this. I don’t mind driving through blizzards, and he scolds me for passing people on the highway during snow storms. I take a zen-like approach if my car starts to slip and slide, I’m one with the car, and through a combo of breaks, gas and steering, the car stabilizes and off we go again. You bet I made it up that hill to work this morning, whirr whirr be damned. 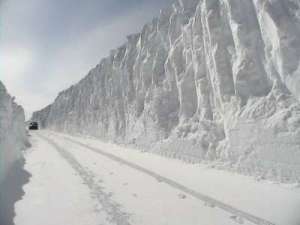 Yeah, that's right... this isn't a photo from Antarctica, this is a photo taken during the 2006-2007 storm season when the BBC featured us. That black spec is a car, driving between the towering snow banks.

When my students from tropical countries start coming in to our office in November and December complaining about the cold, nasty New England weather, I share with them stories about my home town. My particular favorite is to talk about the winter of 2006-2007 when the city was hit with two major snowstorms, burying the town in about 13 feet of snow in a matter of a week or two. As an avid BBC reader, I couldn’t believe it when my little town made it on their news site!

A few weeks back, my dad sent me one of those email forwards, the kind that says, “you know you are from ____ if” and I wanted to share some of my favorites…

“If you’re proud that your region makes the national news 96 nights a year because Saranac Lake is the coldest spot in the nation, and Syracuse gets more snow than any other major city in the US , you might live in Upstate NY.”—there is definitely a pride thing, seeing your home town featured on The Weather Channel.

“You can drive 65 mph through 2 feet of snow during a raging blizzard without flinching.”—oh yeah baby!

“You design your kid’s Halloween costume to fit over a snowsuit.” – so true! We always had to do this!

Where we live now isn’t so bad, and I feel like a hardened winter weather warrior when people start to freak out about an approaching storm. The point is–P might come from the former “Himalayan kingdom” but I think I hold the “Queen of Snow” title in our household.

3 responses to “Musings on Winter…”